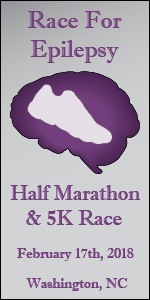 James P. Patterson III first started having seizures when he was 5 years old in 1985. As he got older his seizures became more frequent and more intense. At 17 years old, James was having an average of 25 seizures per day. It was then he decided to have brain surgery since his medication was having little to no effect on his epilepsy. In the summer of 1997 his left temporal lobe and hippocampus were removed. James has been seizure free since the surgery. His side effects from the surgery are: difficulties in expressive communication, weak vocabulary, and difficulties in recalling information (memory). After years of therapy, medication, and counseling, James has adapted to the issues.

While working on his bachelors at Appalachian State University, James started speaking publicly about his disability. He graduated from Appalachian in 2004 and immediately got a full-time job providing public service to the community that he still has at this day. Staying physically active (mostly running) has helped James handle the side effects due to epilepsy. James enjoys running half marathons, marathons, and ultras.