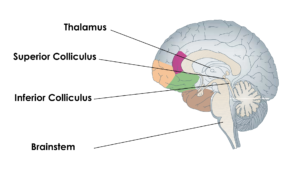 Taken together, these novel results suggest the critical role of the superior colliculus in seizures that may lead to SUDEP. The results also strengthen the understanding of the sequence of events that may cause SUDEP. Spreading depolarization in the superior and inferior colliculus reaching the brainstem was associated with respiratory arrest, followed by cardiac arrest that is seen in SUDEP (as seen in the chart below). While more studies are necessary to understand the role of these brain structures in SUDEP, these data help envision methods to target and address brainstem spreading depolarization as a way to prevent SUDEP.