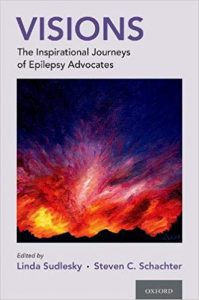 From editors Linda Sudlesky and Steven C. Schachter, Visions: The Inspirational Journeys of Epilepsy Advocates contains the stories of 50 people who have answered the call to advocate on behalf of those with epilepsy. They are people with epilepsy or members of their community, motivated to make a positive impact through education and awareness, empowerment, fundraising, healthcare and research, and organizational advocacy.

Shining a light on well-known issues as well as rare forms of epilepsy and SUDEP (Sudden Unexpected Death in Epilepsy), these advocates depict their journeys through both prose and photographs. Along with stories that depict the advocates’ journeys, photographs show these advocates and their work in action.

Visions: The Inspirational Journeys of Epilepsy Advocates empowers people affected by epilepsy and inspires continued advocacy for what has been a misunderstood and underfunded neurological disorder.