CURE Discovery: Inhibition of an Important Brain Enzyme Attenuates the Development of Epilepsy
May 27, 2020

In his CURE-funded research, Dr. Detlev Boison and his team found that an adenosine kinase inhibitor called 5-ITU increases adenosine levels in the brain, protecting it from seizures. 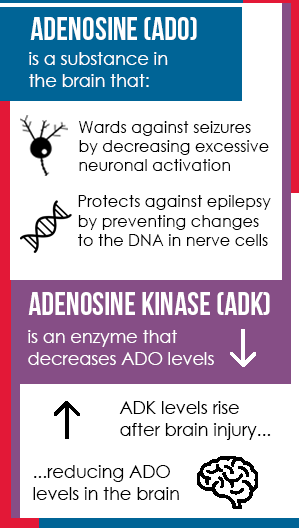 One of the most common ways of developing epilepsy is through “acquired” means, such as a severe concussion, brain infection, fever-induced seizure, or stroke. A naturally occurring substance in the brain, called adenosine (ADO), plays a protective role by decreasing excessive neuronal activity1,2 and protecting the DNA in nerve cells from changes that contribute to the development of epilepsy.3 ADO levels in the brain are regulated by an enzyme called adenosine kinase (ADK) and, unfortunately, brain injuries often trigger a series of events that elevate levels of ADK. In his CURE-funded research, Dr. Detlev Boison and his team found that an ADK inhibitor called 5-ITU increases ADO levels in the brain and protects it from seizures.

To make this discovery, the team evaluated if short-term treatment of 5-ITU following an injury to the brain could halt the development of epilepsy over the long-term.4 To do so, they used a mouse model of acquired epilepsy that reliably develops seizures two weeks after an injury. The team first had to determine the appropriate time points to administer 5-ITU following a head injury. Over a two-week period, the team monitored the progression of brain tissue damage in their mouse model, along with ADK levels and changes in EEG, analyzing samples at different days post-injury compared to controls. The team found that by the third day, ADK levels had started to increase and continued to increase over the two-week time period, accompanied by a loss of neurons in an area of the brain called the hippocampus and changes in EEG patterns by the fourteenth day post-injury.

Reasoning that 5-ITU should first be administered when ADK levels initially rise, the team gave their mouse model the substance for a limited time – for only five days starting on day 3 post-injury – and continued to monitor the mice closely. After six weeks, the team found that the 5-ITU-treated mice had little brain tissue damage, significantly decreased ADK levels, and fewer seizures compared to the control group. Importantly, these changes were sustained even after nine weeks.

Discovering that short-term inhibition of ADK leads to a long-lasting antiepileptogenic effect makes this a promising therapy, especially since it could avoid any potential toxicities and intolerable side effects from long-term use of ADK inhibitors. Such a treatment would represent a true cure for epilepsy. Dr. Boison’s groundbreaking research supports the development of improved, more selective compounds which can one day be tested in clinical trials and, hopefully, approved for clinical use.

For more than 20 years CURE has been on an unrelenting mission to end epilepsy. We have funded more than 240 grants in 15 countries to better understand the causes of epilepsy, uncover new therapies, and cure epilepsy once and for all. Now it is time to take those research findings one step further.

We are thrilled to expand our current research approach with the CURE Catalyst award, and to name Dr. Boison the first grantee under this new mechanism. This grant funds translational research, where findings from basic research studies are “translated” into the next phase of research to prepare potential new treatments for clinical trials. You can learn about the continuation of Dr. Boison’s work here.

CURE Epilepsy Discovery: Investigating Mechanism of the Progression of Epilepsy

This CURE Epilepsy funded research paves the way for future studies that may identify ways to prevent harmful changes in myelination to treat some forms of epilepsy.

Dr. Lacuey hopes to use these valuable results to develop a device that will stimulate critical areas of the brain following seizures to enhance breathing and avoid its cessation, thereby preventing SUDEP.