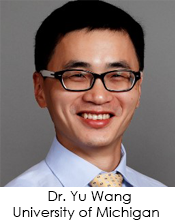 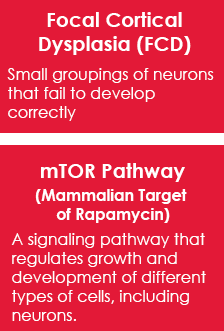 Dr. Yu Wang and his colleagues at the University of Michigan are one step closer to understanding the process of epileptogenesis in FCDs and developing therapies for it. FCDs (small groupings of neurons that fail to develop correctly) are a common cause of difficult-to-treat focal epilepsies. Surgery is often the only treatment option for those impacted by FCDs, and up to 50% of pediatric epilepsy surgery patients have FCDs that are detectible by MRI.1

Dr. Wang’s team sought to generate a novel animal model of FCD with the same features as humans with mutations in a gene called DEPDC5. This gene is part of the mTOR signaling pathway and is associated with development of FCD-related. Other animal models used to study DEPDC5 are limited in usefulness as they fail to either develop spontaneous seizures or show the same electroclinical features as human FCDs.

To create their model, Dr. Wang and his team used a gene editing technique called CRISPR-IUE in rats to delete DEPDC5 only in the brain’s cortex and not the entire body, thereby more accurately replicating human FCD.2 The team found that 100% of the animals developed spontaneous seizures, had hyperactivation of the mTOR pathway, and displayed brain malformations as seen in human FCDs. Importantly, these animals displayed seizure activity highly similar to those recorded in humans with FCDs. 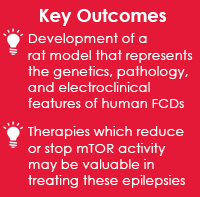 This new model had another feature seen in some types of FCDs: enlarged cell size. Dr. Wang and his team observed that neurons with DEPDC5 deletion were almost twice the size of neurons with a normal level of DEPDC5. The team treated the animals with a drug called everolimus and reversed the increase in neuronal size in their model.

Dr. Wang’s work has led to a model that represents the genetics, pathology, and EEG features of human FCDs. Critically, their work demonstrates that a known drug may be valuable in treating these epilepsies. The team is currently using this model to understand how DEPDC5 mutations cause malformations leading to epilepsy, and to develop a novel gene therapy strategy for mTOR-related cortical malformation and epilepsies. While Dr. Wang’s career is just starting to take flight, we can’t wait to see how his insights and innovations will drive science forward!

vagal nerve stimulation (VNS) can offer palliative benefit for patients with epilepsy that is refractory to medical management and not amenable to resective surgery.

Fear of Public Places Is Common in Adults with Epilepsy

“We know that agoraphobia can lead to delays in patient care because of a reluctance to go out in public, which includes appointments with health care providers,”

Frequency of and Factors Associated with Antiseizure Medication Discontinuation Discussions and Decisions in Patients with Epilepsy: a Multicenter Retrospective Chart Review

Only approximately half of patients with prolonged seizure-freedom had a documented discussion about antiseizure medication discontinuation. Discontinuation was fairly rare even among low-risk patients.