Infantile spasms (IS) is a rare (~0.03% of all live births) and catastrophic type of epilepsy that usually first manifests between 3 to 7 months of age [2,3], and infants with poor response to first-line treatment are at an increased risk for a more serious form of epilepsy known as Lennox-Gastaut syndrome (LGS) [4]. Because one of the symptoms includes stereotypical jerks resembling colic, IS is difficult for parents and sometimes even pediatricians to recognize. Conclusive diagnosis is made by the spasms themselves, developmental delay, and often an abnormal, disorganized electroencephalographic (EEG) pattern known as hypsarrhythmia. This chaotic EEG pattern is observed between seizures and characterized by irregular, nonrhythmic waves and spikes of electrical activity [2,3].

IS is commonly treated with a combination of one or two specific steroids (adrenocorticotropic hormone [ACTH] and/or prednisone) and/or the antiseizure medication (ASM) vigabatrin [3,5,6]. These treatments are only effective in approximately 50% of patients [7] and, for those who do respond, diagnosis must be made early enough to minimize significant cognitive deterioration. However, these therapies do not reduce the incidence of future epilepsy and almost two-thirds of these infants continue to have seizures that do not respond to existing therapies [6]. Unfortunately, at present there is no consistent way of predicting who will respond to these treatments. Moreover, the optimal therapy would not only acutely arrest seizure activity but would also possess a “permanent” disease-modifying effect and perhaps even reverse any cognitive decline that had already taken place.

More severe and most frequent causes of IS stem from structural abnormalities in specific regions of the brain [2]. To understand the underlying biology of this form of IS and identify effective treatments, Dr. Aristea Galanopoulou, a member of CURE Epilepsy’s Infantile Spasms Initiative [8], at the Albert Einstein College of Medicine, and colleagues Drs. Solomon Moshé and Morris Scantlebury, developed a rat model known as the “multiple-hit model.” This model has brain lesions that closely mirror those observed in the brains of infants with IS, along with more visible traits such as developmental delay, behavior problems, poor social skills, drug resistance, EEG abnormalities, and potential emergence of other seizure types [1]. 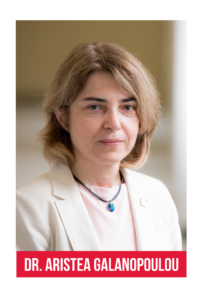 Using this model, Dr. Galanopoulou’s team created a platform for screening the potential for various drugs to treat IS. The investigators first used the model to test the ability of the drug rapamycin, an inhibitor of a neuronal signaling pathway linked to epilepsy, to affect IS symptoms [9]. Importantly, rapamycin was given in a 3-day pulse (as opposed to continuous administration) and only after the onset of spasms. This strategy of drug delivery is meaningful since it mimics what happens in clinical practice. A previous study from this group [9] had shown that the rapamycin stopped the spasms and was able to partially restore learning and memory deficiencies, which suggests that the rapamycin was able to modify the progression of IS. However, rapamycin did not diminish any of the other seizure types or reduce the size of the structural lesions.

To better understand the long-term effects of the pulse rapamycin treatment, the researchers then examined [10] whether it reduced the rate of epilepsy in adult rats with IS. The same 3-day pulse of rapamycin was given to the “multiple-hit” rats and investigated in greater detail. In the absence of rapamycin, and similar to the clinical picture of some severe cases of IS in humans, rats eventually exhibited LGS-like features such as motor seizures during sleep and a distinct EEG pattern termed “slow spike-wave discharges”. Importantly, the pulse rapamycin treatment that had been used to stop spasms early in life significantly reduced the rate of epilepsy with motor seizures in adult rats with IS. Furthermore, rapamycin also reversed the sleep disorder seen in these rats, suggesting an interesting relationship between sleep and epilepsy. These preclinical findings raise hope that drugs like rapamycin may be developed for treatment of IS, to both stop spasms and prevent lifelong epilepsy and associated comorbidities, filling a current gap in the clinical management of IS.

vagal nerve stimulation (VNS) can offer palliative benefit for patients with epilepsy that is refractory to medical management and not amenable to resective surgery.

New Research Reveals Clues About the Development of Epilepsy