Dr. Gregory Worrell’s path towards ultimately engaging in epilepsy research did not follow a direct road. He first trained and worked as a PhD-level physicist before entering medical school and then completed a neurology residency followed by an epilepsy fellowship. It took several additional years to reach his current role as a physician-scientist caring for epilepsy patients while simultaneously maintaining a productive research laboratory. Nevertheless, Dr. Worrell’s unique training in engineering and physics, along with the computational analyses, gave him the expertise required to understand and develop devices to monitor and modulate electrical activity of the brain.

Dr. Worrell credits his mentors, including Dr. Gregory Cascino, also at the Mayo Clinic, and Drs. Marc Dichter (a former advisor to CURE Epilepsy) and Brian Litt (a former CURE Epilepsy grantee), both at the University of Pennsylvania, with influencing his career direction. They provided the model, encouragement, and opportunity for a career as a clinician-scientist. Dr. Worrell’s first research grant was from CURE Epilepsy, and he attributes this critical funding for getting him started in epilepsy research. Even though he was also awarded an NIH training award, he feels that, in many ways, the CURE Epilepsy grant was more important because it introduced him to the community of epilepsy researchers

Dr. Worrell’s grant from CURE Epilepsy focused on high-frequency oscillations (HFO), brain waves with a frequency of greater than approximately 80 Hz that are often associated with seizure activity in specific regions of the brain [1]. This electrical activity can be detected on an electroencephalogram (EEG), but at the time (approximately 20 years ago), HFOs were rarely observed simply because the range of a typical EEG was limited to no greater than 70 Hz, biased by then-accepted practice [2]. Basic research with animal models, however, had suggested that an epileptic brain exhibits a much wider dynamic range of activity, sometimes out to frequencies greater than 1,000 Hz, and so Dr. Worrell focused his early efforts on broadening the spatial and temporal sampling of brain waves [2-4]. These so-called “wide-bandwidth” recordings have now become standard in the field. 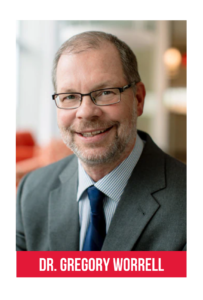 The early learnings achieved through the CURE Epilepsy funded research have carried over into the development of “next-generation” implantable therapeutic devices [5], done as part of an NIH Brain Initiative public-private partnership with Medtronic, a company with a long history of creating medical devices. The “public” component is funded through two NIH grants awarded to Dr. Worrell. The aims are to develop new device technology that will permit the tracking of a patient’s brain state, identify periods of increased seizure probability, and adaptively intervene to modulate the brain, moving it to a state of low seizure probability to prevent seizures from ever occurring. Importantly, it has the potential of providing something akin to a “daily weather report”, giving the patient a sense of when a seizure might occur. This is particularly crucial given that one of the most disabling aspects of epilepsy is not necessarily the seizures themselves but their unpredictability. With this type of technology, there is an opportunity to administer therapies, e.g., anti-seizure medications and/or brain stimulation, both of which have considerable side effects, in a time-limited way instead of a continual process. Creating the next generation of electrical stimulation and sensing devices for epilepsy has remained a focus of Dr. Worrell’s research.

While Dr. Worrell is proud of his individual achievements, he notes that consequential advances in medicine are usually the outcome of team efforts, with dozens perhaps even hundreds of clinicians and scientists collaborating [5,6] To this end, he has participated in numerous clinical trials to test novel devices, including the FDA approved responsive neurostimulator (RNS®) manufactured by Neuropace Inc, to control seizures, and he derives considerable satisfaction from these collective undertakings. Dr. Worrell enthusiastically admits that he receives additional joy in life from taking care of his patients, following their progress over time, and being able to improve their quality of life through the neurophysiology/neuroengineering research performed in his own lab and through collaborations with other clinicians and scientists. In his mind, there is no greater reward than having the ability to help patients in this way

CURE Epilepsy is proud to have played a role in the illustrious career of Dr. Gregory Worrell in advancing research so that we, as a society, will one day be truly able to say that we live in a world of “no seizures and no side effects.”