While new cases of epilepsy are most common in children, especially in the first years of life1, 2, epilepsy and seizures can develop in any person and at any age. Thus, the diagnostic journey for a child will look different than that of an adult.

On this page, we will look at the specifics of diagnosing epilepsy in children and adults. The pediatric section includes information for parents and caregivers, broken out by age group. The adult section looks at what can be done after a seizure, tests that may be recommended, and what might happen once the tests are done.

Approximately 470,000 children in the US have epilepsy, with an estimated 50,000 new diagnoses each year. Typically, when a child has their first seizure with visible symptoms (such as jerking or loss of consciousness), they are taken to the emergency department or an urgent care setting where they are stabilized.1

The doctors will examine the child to ensure they do not have a serious medical problem. Description and detail about the child’s seizure can be very helpful to the emergency physician treating your child. If possible, the caregiver should try to time the seizure, or provide an estimate for how long it occurred.

Other things that are important to notice are:

In addition to diagnostic tests such as electroencephalography (EEG) and a neurological exam, the doctor may ask questions to the parent or caregiver about:

Once the child is stabilized, they should be taken to a pediatrician, primary care physician (PCP), or pediatric neurologist for examination and to diagnose the cause of the seizure. The child’s age may be a special consideration that is factored into their diagnosis and treatment. Since the brain is rapidly developing from the neonatal period to adolescence, it is critical that you take your child to a physician as soon as possible.

The neonatal period is defined as the first 28 days of life in a full-term infant. Many signs of neonatal seizures such as chewing, and “bicycling” movements can occur in healthy newborns as well, which is why testing is essential to confirm the diagnosis of epilepsy.

Neonatal seizures typically occur within the first two weeks of a child’s life. Premature babies are, unfortunately, more likely to suffer from neonatal seizures. EEG and neuroimaging techniques are used to diagnose epilepsy in neonates. Prompt treatment is critical for the neonatal brain.

Antiseizure medications (ASMs) may be prescribed, and the baby will be closely monitored while receiving the medications. 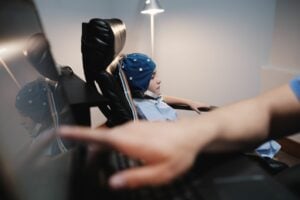 Doctors will use the patient’s medical history – and their families – along with neurological exams to diagnose epilepsy in infants and children. Descriptions of the seizure can aid in the diagnosis, including video if possible. Please note that seizures in infants may also be difficult to recognize as they may be subtle and look like the baby’s normal movements.

If the patient has been diagnosed with epilepsy, their doctor will prescribe them treatments such as ASMs to control seizures. If medications are not effective, however, the doctor may recommend a combination of ASMs, alternative therapies, dietary therapies, and even surgery to help control seizures.

While there are instances where a child with epilepsy stops experiencing seizures before adolescence, all caregivers need to help manage their child’s seizures. This can be accomplished by maintaining a healthy lifestyle with regularly scheduled visits to the doctor. The causes of epilepsy in childhood can be many: injury or insult to the brain, infection, abnormalities in brain development, or genetic variant(s).

Some epilepsy syndromes such as juvenile absence epilepsy (JAE) typically occur between the ages of 12 and 18. In addition to the precautions one would take with infants and children, caregivers of adolescents should also be mindful that their teenager is in a great period of change.

As they begin to explore their sense of individuality, it’s important that they avoid risky behavior, like staying up late, skipping their medication, or consuming alcohol and drugs. Trust and support are critical to ensuring that seizures are being managed. Some teenagers may find having epilepsy to be isolating – be on the lookout for signs of anxiety or depression. 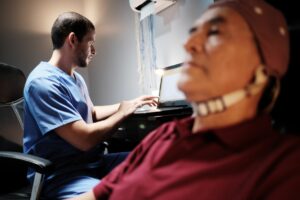 Like pediatric patients, one seizure in adults does not automatically equal an epilepsy diagnosis. Many of the things discussed in the pediatric journey section above also apply here. For example, if a family member or bystander can video record the seizure or observe its characteristics, it will help the physician make an accurate diagnosis.

When adult patients seek medical care after a seizure, they will be examined and undergo many of the same tests that children and adolescents do. These include detailed family history, medical and neurological exams, EEG, and neuroimaging techniques such as MRI and CT (CAT) scans. They will also ask age-appropriate questions, like if the seizure was provoked by alcohol or drugs. They may also ask questions to determine if an infection or head trauma could have contributed.

The results from all the tests will assist in determining the appropriate treatment plan. The doctor may advise you to be careful while swimming, bathing, and driving a motor vehicle in case a second seizure happens.

Late-onset epilepsy is quite common and may be a result of stroke, heart disease, brain tumors, or Alzheimer’s disease. However, in many cases, the cause is unknown. Patient history and EEG are the most important tools to diagnose epilepsy in this age group. ASMs are generally the treatment of choice for this age group.

Those who have had an unprovoked, spontaneous seizure (that is, there was no clear seizure trigger) may be diagnosed as having epilepsy and may be prescribed an ASM for seizure control. Approximately two-thirds of people with epilepsy will be able to control their seizures with medication.  However, approximately one-third of patients will not be able to achieve seizure freedom despite trying multiple ASMs and combinations of ASMs. This is called drug-resistant epilepsy, but the terms intractable and refractory are also used.

Patients with late-onset epilepsy are often on multiple medications for other conditions, so it is important to watch for drug interactions and to make sure that any medication prescribed for epilepsy doesn’t make another health condition worse. Additionally, extra caution should be used when driving, taking baths and showers, climbing ladders, and operating machinery.

If the patient’s seizures are difficult to diagnose or treat, they may be referred to a specialized epilepsy center with neurologists that specialize in epilepsy (epileptologists) and have access to state-of-the-art technologies and techniques to treat epilepsy. Oftentimes, these centers also participate in clinical trials which offer access to antiseizure medications that are in development. Epilepsy centers are also equipped to evaluate candidates for epilepsy devices and surgery.