Dr. Gemma Carvill, a former CURE Grantee who is a leader in epilepsy genetic research, was awarded a Taking Flight Award in 2015, early in her career. This grant aims to encourage young investigators to conduct independent research and blossom in the field of epilepsy. Her intriguing study explored how genetic mutations can cause epilepsy to develop, particularly a group of severe, treatment-resistant childhood epilepsy syndromes called “epileptic encephalopathy”.

Since receiving her CURE grant, Dr. Carvill’s career has certainly “taken flight”. Today, she heads her own lab at Northwestern University in Chicago, IL, where her team continues to focus on understanding the underlying genetic and epigenetic mechanisms of epilepsy.

We had the chance to catch up with Dr. Carvill during a recently aired episode of our Seizing Life® podcast. Watch or Listen to learn more about epilepsy genetics and Dr. Carvill’s exciting research. 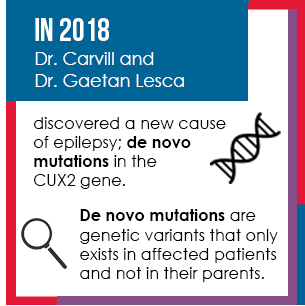 In 2018, Dr. Carvill partnered with Dr. Gaetan Lesca of the Lyon University Hospital in creating an international study on epilepsy genetics. Together, they identified a new cause of epilepsy; de novo mutations (genetic mutations existing only in affected patients and not in their parents) in the CUX2 gene.1 CUX2 is a protein that activates (turns on) or suppresses (turns off) other genes, and specifically regulates genes involved in establishing connections between nerve cells.

Because of Drs. Carvill and Lesca’s collaboration, this genetic cause of epilepsy can now be targeted for the development of potential therapeutic interventions. 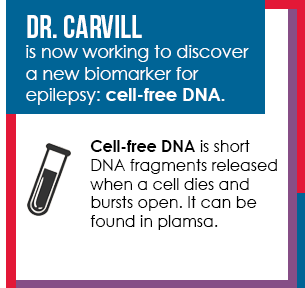 Dr. Carvill is continuing her important work with the help of a New Innovator Award from the National Institute of Health (NIH). In her own words, this award is granted to researchers with “a completely crazy idea that, if it pans out, could really transform clinical care for patients.” Her lab is examining if cell-free DNA (short fragments of DNA released when a cell dies and bursts open) found in plasma can be used as a biomarker of epilepsy.

A big challenge in diagnosing and treating epilepsy is that we only have one reliable biomarker; structural abnormalities in the brain. While widely used, EEG testing can fail to capture seizure data. Dr. Carvill’s work may lead to a new way to identify when patients have had seizures.

Hear more about this innovative work from Dr. Carvill on this episode of the Seizing Life® podcast and learn more about how discoveries in the lab are translated into improved patient care.