The initiative was established to support collaborative, milestone-driven efforts that advance the understanding of the underlying pathology of infantile spasms and lead to the development of a disease-modifying therapy or cure for infantile spasms.

Infantile spasms is a rare and particularly severe epilepsy syndrome that typically begins within the first year of life. Infantile spasms is characterized by subtle seizures which can have large neurological effects and an atypical EEG pattern; these symptoms can lead to large developmental delays and cognitive and physical deterioration.

The exact mechanisms underlying infantile spasms are not completely understood.

Sadly, many primary care doctors and parents alike are not familiar with the signs and symptoms of infantile spasms. So, many children with infantile spasms do not receive treatment during the critical window within the weeks and months after the emergence of symptoms. Many other children do not respond to available treatments for infantile spasms or these treatments have substantial adverse side effects, giving these children a dire prognosis.

Since 2011, CURE Epilepsy has funded cutting-edge infantile spasms research. In 2013, grants were awarded to a team of investigators through a groundbreaking, multi-disciplinary ‘team science’ initiative to advance research to find a cure for this devastating condition. Collectively, the investigators studied the basic biology underlying IS, searched for biomarkers as well as novel drug targets, and developed improved treatments. The CURE Epilepsy Infantile Spasms Initiative generated 19 publications to-date, 7 additional manuscripts in preparation, 3 federal grants from the National Institutes of Health (NIH), and even a patent, published in October 2018.

CURE Epilepsy has been a Leader in Infantile Spasms by: 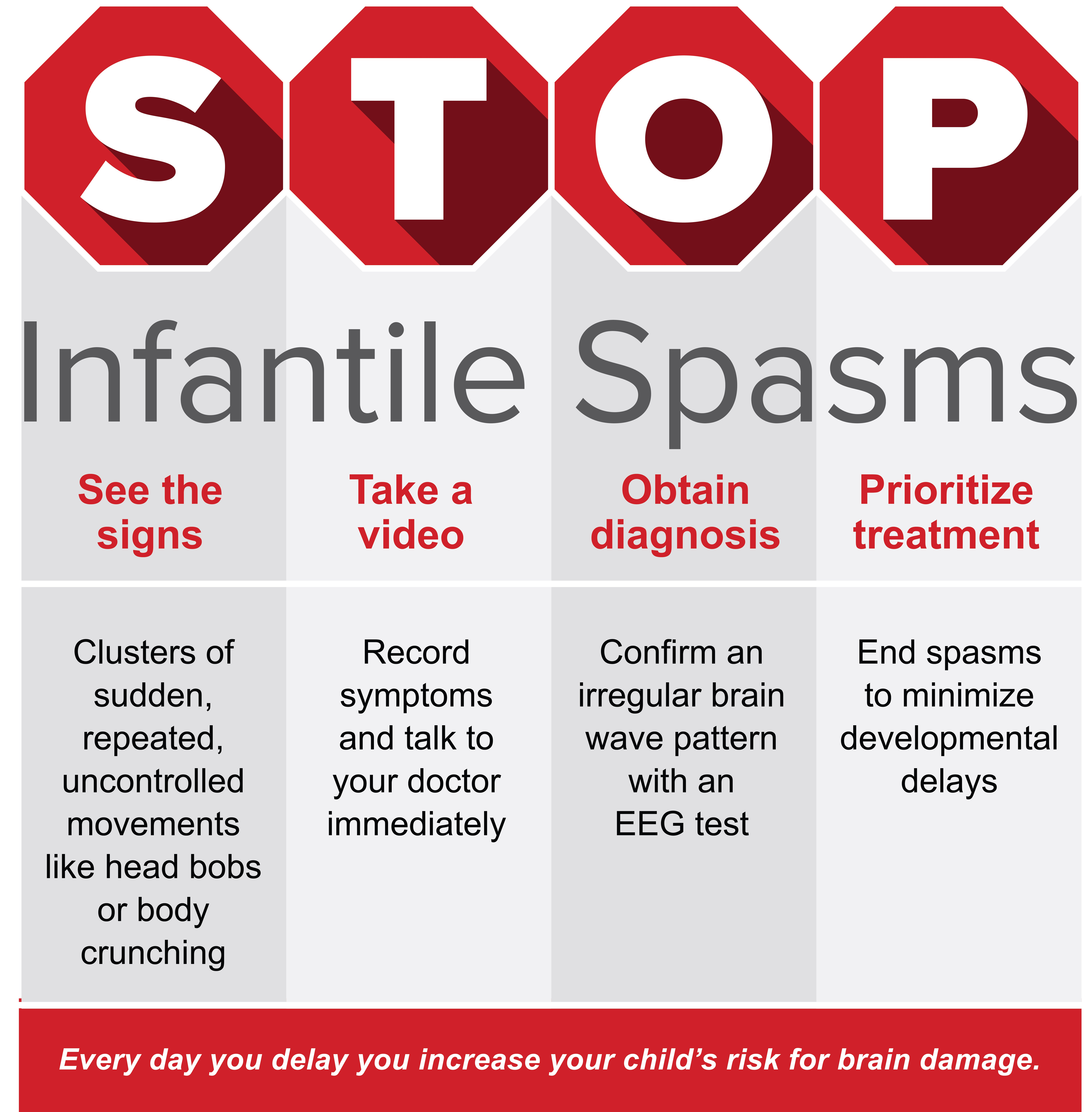 What are infantile spasms?

Infantile spasms is a rare epilepsy disorder that most often emerges within the first year of life. The first symptoms that are typically noticed are physical spasms, which may look like brief, synchronous movements of the head, trunk, and limbs, or may be subtler ‘head nods’. Children with infantile spasms also typically show developmental delays or developmental deterioration, which may become apparent after the first symptoms appear. Additionally, children with infantile spasms often have an abnormal EEG characterized by hypsarrhythmia, which is a disorganized pattern of brain activity.1

Infantile spasms are also known as West Syndrome, after Dr. W.J. West, who first described the symptoms of “infantile convulsions” in his own son in 1841 (West, Lancet, 1841).

1 Commission on Pediatric Epilepsy of the International League Against Epilepsy, 1992; Lux and Osborne, 2004

Infantile spasms can be subtle or obvious. In the subtlest cases, these seizures may take the form of a slight drop of the head or other type of involuntary movement. They might also look like the classic Moro reflex, in which an infant reaches both arms out at the same time. Other infantile spasms may involve the infant extending or jerking its arms, legs, and neck at the same time. These spasms can occur as a single event, or may occur in clusters of several spasms. They often occur in the morning or after the child wakes from a nap.2

How can I tell if my child is having infantile spasms?

What should I do if I suspect my child is having infantile spasms?

If you suspect your child is having infantile spasms, take a video to show your child’s pediatrician or a neurologist and have your child evaluated. Infantile spasms can be subtle and are often mistaken for other conditions, but it is important to get a diagnosis as soon as possible – so follow your instincts if you believe something is wrong.

This helpful mnemonic tool developed by the Infantile Spasms Action Network (to which CURE belongs) can help you understand what to do if you suspect infantile spasms: 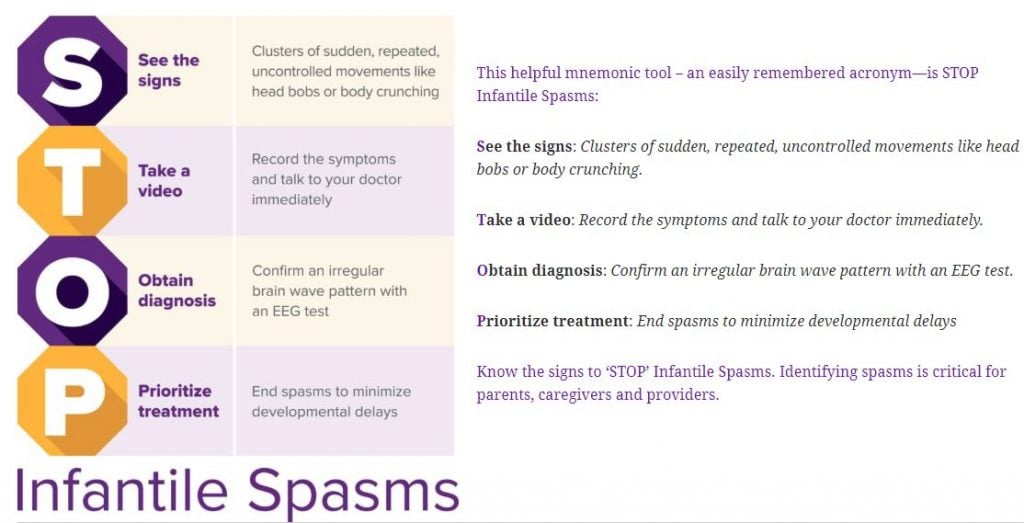 How are infantile spasms diagnosed?

Diagnosis will typically first consist of a physical examination to determine whether spasms can be seen. Because spasms may not occur while the child is at the doctor’s office or may be very subtle, it is helpful to bring a video of a suspected episode to show the doctor.

Age is also considered in diagnosis, because infantile spasms most often emerge within the first year of life, frequently between ages 4 and 8 months (although they can occur later).

An EEG is an important part of diagnosis. The most common EEG pattern associated with infantile spasms is hypsarrhythmia, which looks like very large, disorganized, and chaotic brain waves.6

What treatments are available for infantile spasms?

Currently, two of the most effective treatments for infantile spasms are adrenocorticotropic hormone (ACTH), a hormone produced by the body, and Vigabatrin, an antiseizure medication.7 There are also a number of other hormonal therapies and drugs that are sometimes used to treat infantile spasms, and in certain cases surgery is recommended.7 The American Academy of Neurology (AAN) and Child Neurology Society created an information sheet that provides more information on infantile spasms treatment options. It is important to weigh the benefits and drawbacks of each treatment method. Your doctor can help you develop a treatment strategy that is right for your child.

How often does infantile spasms occur?

In most studies, the number of reported infantile spasms cases falls in the range of 2 to 4.2 children per 10,000 live births per year.8 Infantile spasms have been found to occur slightly more often in boys than in girls,9 and most often appear between the ages of 4 and 8 months.10

Where can I get more information on infantile spasms?

Infantile Spasms Project: A program based at the UCLA intended to guide parents and caregivers of children with infantile spasms as well as practitioners in a straightforward way.

Child Neurology Foundation: An organization that provides support and education for caregivers and children with neurologic conditions, including the promotion of infantile spasms awareness and providing information on the Infantile Spasms Action Network.

Tuberous Sclerosis Alliance: An organization committed to supporting tuberous sclerosis research and providing education and support for individuals and families affected by the disorder.

Acquired Interneuronopathy in a Mouse Model of Infantile Spasms

Preventing Autism and Other Long-term Complications of Infantile Spasms (is)

Launched in 2013, CURE Epilepsy’s IS Initiative was an innovative interdisciplinary program designed to advance findings that could lead to better treatments for IS. It brought together eight research groups from different institutions who functioned as a united team, collaborating and sharing data to accelerate understanding of IS in an effective and efficient fashion…Read More

This study aimed to determine risk factors and causes for mortality during childhood in patients with infantile spasms (IS).

In this phase IIb study, phenobarbital was more effective than levetiracetam for the treatment of neonatal seizures.