It is estimated that over 30% of people with epilepsy also meet the diagnostic criteria for autism.1 In this webinar, presented by Dr. Jamie Capal, hear leading theories on the interconnection between autism and epilepsy. Learn about the most common seizure types in people with autism and dive into the current research on why so many children with autism develop epilepsy.

Dr. Jamie Capal is Associate Professor of Pediatrics and Neurology at Cincinnati Children’s Hospital Medical Center. Dr. Capal has been an integral member of the multidisciplinary Tuberous Sclerosis Clinic Center of Excellence and maintains a busy clinical practice diagnosing and treating children with autism spectrum disorders and comorbid neurological disorders. Her current research is focused in the areas of autism spectrum disorder and Tuberous Sclerosis Complex.

To hear an author, journalist, and mother discuss how her family has navigated the dual diagnosis of autism and epilepsy to help her son live his best life, watch or listen to the Seizing Life episode Raising A Child with Both Autism and Epilepsy featuring Liane Kupferberg Carter. 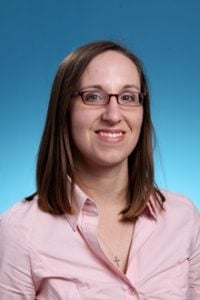 Your presentation shared a lot of information about tuberous sclerosis complex. Can you speak to the information we’ve gathered there, and how that might translate to other neurodevelopmental disorders?

That’s a great question. Currently what we’ve learned is that the earlier your brain gets disrupted (by seizures for example), you’re at a much higher risk for overall disorganization of the brain. And so, what we’re trying to figure out is, are there other things that can tell us what else is going on from a structural standpoint, from an EEG standpoint? Because the goal is prevention.

There are studies going on now, the PREVeNT trial for example, looking at early seizure treatment in babies with Tuberous Sclerosis Complex who have not had seizures yet, but do have abnormalities in their EEG. If you treat the abnormalities before the seizures come, will you get better results with development? And maybe better results as far as preventing autism? That study is closing right now, so we are very interested to learn the results, because really that’s the next step.

Many other neurodevelopmental disorders are also looking at similar things, and what we know is looking earlier is better. The earliest we can try to advocate for prevention, the better off we are to disrupt these mechanisms that result in developmental delays and autism.

EEG testing is not standard when screening for autism. What sort of information would need to be gathered in order to make that a more standardized approach?

I think what we really need is a protective studies – basically doing screening EEGs on all kids that are newly diagnosed with autism, and then follow them out longitudinally. But the problem is that this is a very expensive and long study, but I really think it’s something that needs to be done. That way, we have a true idea of what the percentage of kids with autism have abnormal EEGs, and what their risk of eventually developing epilepsy is. That will give us the evidence we need to say, “Everybody with autism needs to get an EEG as screening.” Right now we just don’t have anything.

In focal epilepsy, if seizures are emanating from a specific area of a brain, is a person more likely to develop autism?

Has any research looked at if children with autism can improve cognitively with increase seizure control?

The study I referred to in my presentation that is looking at the natural history of the development of autism is working to understand this. We collect all the seizure diaries form patients in this study, and we are going to see if anyone’s scores improve with treatment. There’s also a group looking at whether or not improving seizure control with epilepsy surgery increases cognitive development. Again, the goal though is to look at this early in life. That is where the field is going right now. Nothing has come out of it yet, but that’s we’re looking.

We know epilepsy can impact cognitive function, and then cause cognitive decline in a way that might make an adult look like they have some aspects of autism. Is this due to the seizure activity? Is there a way to protect the brain from that seizure activity?

That’s a difficult question to answer. Think about the epileptic encephalopathies, for example. Those are the patients who are having lots and lots of seizures, and even when they’re not having seizures, they’re background brain activity is abnormal. Their neuronal connections are not allowed to form correctly, so those patients are going to develop cognitive impairment. In those cases, by controlling the seizures, you would expect cognition to improve.

In other cases though, it’s less clear. I think you have to think about epilepsy as not causing necessarily causing the delays. There may be two things happening simultaneously, and epilepsy is just making it worse. So treating epilepsy may help, but it’s not going to reverse cognitive impairment.

Are there links between epilepsy, autism, and Alzheimer’s?

I can’t say that I know a lot about the literature for Alzheimer’s, but I can say there is a lot of interest in looking at the connection between Alzheimer’s and autism. I think there are a lot of shared genetic mechanisms between these conditions. That connection is definitely something I think needs to continue to be looked at as we do more genetic studies. We need to look at; what are the shared genetic links between individuals with Alzheimer’s and autism? That being said, research has found that there are many similarities in the connectivity of the brain in both of those disorders.

Many people with epilepsy, including those with autism, are not responsive to medications, and antiepileptic drugs can cause side effects, like mood changes, GI issues, anxiety, increased repetitive behaviors that worsen…. What are your thoughts about the VNS, and more specifically the noninvasive VNS that is not approved in the US as yet? Does it help with autistic behaviors at all?

I like VNS. I think there are some folks it works very well with. I had one patient, for example, who I was thinking about doing a VNS on, but because he is so active and his behaviors were so erratic, he wasn’t deemed a good candidate for it. Another patient I’m thinking of really did well with VNS,  because they were having so many negative side effects from antiseizure medications.

Should all children diagnosed with epilepsy, especially learning disabilities, be screened for autism?

Ideally, yes. The American Academy of Pediatrics has set up a guideline to screen young patients for autism with the M-CHAT, which is a questionnaire that parents get at 18 months, 24 months, and then again between ages two and three.

One problems is that when young individuals are diagnosed with epilepsy, other aspects of their development aren’t really paid attention to as much. So, clinicians are finding that individuals who are being diagnosed with autism much later, because maybe the doctors were spending more time really focused on the seizures. Those folks really should have good surveillance by their pediatrician. If there are any concerns for development, they should be referred on to developmental pediatrician for further work up.

So, this is really a place where parents could be advocating for that.

What evaluations are being done outside the brain and EEG? Are people looking at the gut, the autonomic nervous system, or sleep disruption that are implicated in both epilepsy and autism?

Yes. There are definitely folks looking at the gut-brain connection. I think there’s a lot of interest there. It’s almost like these subtypes of autism. Abnormal EEG is one subtype, then there are patients with GI disturbances in another group. Sleep can be disrupted for many reasons and you see this problem in various subtypes of autism. There’s an autoimmune interest in individuals that potentially have an autoimmune component to their autism, which I again think is another subtype worth studying. So, I think the more we learn about the underlying causes, the better able to study the clinical features we are.

We historically have been looking at autism as a set of symptoms. But if we study autism as the symptoms only, even though there could be hundreds of causes behind it, we’re not really going to learn anything.

There was a question about what type of preventative treatments would be given to a person with autism and abnormal EEGs, but it sounds like we really need to understand the biology.

If we look at benign rolandic epilepsy, for example, those individuals may have a few seizures, but they have a lot of underlying EEG abnormalities when they’re sleeping. Some groups found if you treat the EEG abnormalities, cognition may improve. So, the same thought present here, but nobody has ever done a big enough study to tell us that treating EEG abnormalities is worth it. This area definitely needs to be studied.

It could be very difficult to get a non-sedated EEG on children with autism due to sensory and other issues, especially an overnight. Are there other ways to perform EEGs with a headband or other nontraditional approach?

Some researchers are using the EEG cap. One group is actually desensitize the children in their study by having them wear a hat, so they can get used to the feeling. Those EEGs are pretty accurate versus the traditional leads.

Now, a lot of times we don’t do that clinically. I’m sure there are a lot of reasons financially and training-wise. But I know in research, to get all of these children to have EEGs, the scientists become really creative at desensitizing the kids. For all of our studies we do EEGs on all of our kids, and the tests are actually pretty successful.

What’s involved with genetic testing, and where can we direct people for more information?

Genetic testing can be done several ways. Typically and historically, it’s been a blood test. Your neurologist or developmental pediatrician can order it. What we tend to do is a “chromosomal microarray,” which looks at any deletions or duplication in genes. This test is a good place to start. There are many companies which have developed genetic panels that can be done by blood or saliva. Each panel is different and geared toward a certain set of genes – there’s a autism and developmental disability panel, there’s an epilepsy panel…. So, those are targeted tests.

Then you have the bigger whole exome sequencing. Currently, the Simons Foundation has a big study going on throughout the country called the SPARK study. The study team is collecting saliva from the patient and both parents to look at their exomes and really understand the genetic underpinnings of autism. You can even go to the Simons Foundation’s SPARK study, and can get a kit sent to your house. That’s a great, free way for families to get genetic information, since often genetic tests are not covered by insurance.