Each year on December 1-7, a coalition of organizations (including CURE Epilepsy) recognize Infantile Spasms Awareness Week, a critical opportunity to raise awareness and educate the public about infantile spasms.

This year CURE Epilepsy has some new content to provide families with a better understanding of IS. See our new content as well as useful resources about IS below:

What is Infantile spasms?

Infantile spasms is a rare and particularly severe epilepsy syndrome that typically begins within the first year of life. Infantile spasms is characterized by subtle seizures which can have large neurological effects, potentially leading to developmental delays and cognitive and physical deterioration.

Sadly, many primary care doctors and parents alike are not familiar with the signs and symptoms of infantile spasms. So, many children with infantile spasms do not receive treatment during the critical window within the weeks and months after the emergence of symptoms.

That’s why it’s critical for everyone to know the signs to STOP Infantile Spasms.

INFANTILE SPASMS ARE A MEDICAL EMERGENCY

Prompt diagnosis and treatment are critical, but this is challenging because infantile spasms can be mistaken for normal baby movements or other disorders that don’t demand urgency.

Watch this 2-minute video to learn what infantile spasms look like — it could save your child’s life.

Since 2011, CURE Epilepsy has funded cutting-edge infantile spasms research. In 2013, grants were awarded to a team of investigators through a groundbreaking, multi-disciplinary ‘team science’ initiative to advance research to find a cure for this devastating condition. Collectively, the investigators studied the basic biology underlying IS, searched for biomarkers as well as novel drug targets, and developed improved treatments.

The CURE Epilepsy Infantile Spasms Initiative generated 19 publications to date, 7 additional manuscripts in preparation, 3 federal grants from the National Institutes of Health (NIH), and even a patent, published in October 2018. Read more.

Additionally, research that resulted from the CURE Epilepsy Infantile Spasms Initiative, is putting us that much closer to a treatment for IS. Read more.

Get the Facts about Infantile Spasms 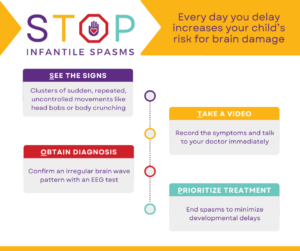 Share this graphic/PDF on how to STOP infantile spasms

CURE Epilepsy is proud to be a part of the Infantile Spasms Action Network. This coalition of organizations is committed to raising vital awareness about IS and its impacts on children.