The Path to a Cure: Improving Genetic-Based Outcomes
October 6, 2020

Dr. Heather Mefford is a current CURE Grantee who is as dedicated to driving science toward cures for epilepsy as she is to treating people in her clinical practice. As Associate Professor of Pediatrics at the University of Washington and attending physician at Seattle Children’s Hospital, Dr. Mefford is making an impact both in and out of the laboratory. 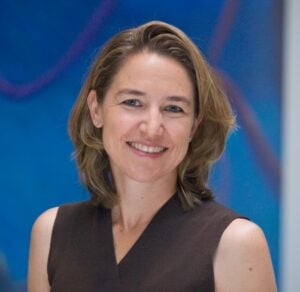 As a physician who cares for pediatric patients living with severe epilepsy syndromes, Dr. Mefford has firsthand knowledge of the devastating impacts of seizures in children. These treatment-resistant epilepsy syndromes are usually caused by a genetic mutation and knowing what that mutation is can potentially inform the treatment plan. As such, genetic testing is a critical part of the epilepsy diagnosis and care process. Dr. Mefford describes what genetic testing involves and what kinds of tests are available in an episode of our Seizing Life® podcast. Watch or listen to learn more.

The DNA of Dr. Mefford’s Genetic Research
When not seeing patients, Dr. Mefford heads a research laboratory at the University of Washington. Over the last 10 years, Dr. Mefford’s team has identified many new epilepsy-related genes and mutations. Dr. Mefford’s lab is currently investigating a type of genetic change that does not alter the sequence of the gene itself but instead affects how the gene functions. This field of research, known as epigenetics, is relatively new and now, excitingly, is being applied to epilepsy. For her CURE-funded project, Dr. Mefford is studying a type of epigenetic change called methylation, in people with severe early-onset, treatment-resistant seizure disorders known as developmental and epileptic encephalopathies (DEE). Despite advanced genetic testing, more than 50% of people with DEE still do not have a genetic diagnosis and work like Dr. Mefford’s could ultimately improve the prognosis for children with these epilepsies.

Leading the Next Generation
To support the future of research, Dr. Mefford has helped launch the careers of the next generation of epilepsy scientists. One of her former trainees, Dr. Gemma Carvill, is also making a big impact on the field of epilepsy research. Dr. Carvill was awarded a CURE grant early in her career and now leads her own independent research program at Northwestern University in Chicago, where she also investigates the underlying genetic and epigenetic mechanisms of epilepsy.